« Eric Boman embarked on a career in fashion photography in the early 1970s, working for British Vogue, Harper’s & Queen, and The World of Interiors in London, and Marie Claire in Paris. Assignments or wanderlust took him to locations near and far, always with the same Leicaflex that he would train on whatever caught his eye. This body of personal work has remained unseen for over 45 years, stored away as 35mm slides. (…) Most of the photographs are devoid of people, in contrast to Boman’s professional work, which has almost always involved some form of portraiture. This book presents the photographs juxtaposed for the visual dialogue that emerges. » (Extrait du texte de présentation de l’éditeur). Photos en couleurs. 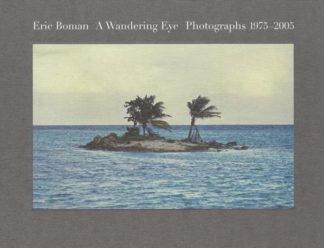