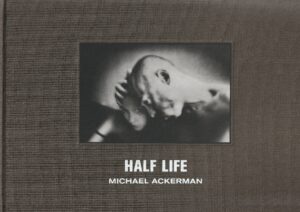 Si vous ne pouvez être présent nous le ferons signer pour vous.
If you can’t be there, we can have them signed for you.

According to Denis Kambouchner’s introduction, Michael Ackerman’s latest book Half Life is a haunted book. It is certainly disturbing; in Michael Ackerman’s world, something is disintegrating. A feeling of isolation pervades; a space weighed down by history takes over everything.

The landscapes are harsh and unwelcoming, combining frozen expanses, blackened houses, vestiges of the mining industry and abandoned cemeteries. But it is the anguish of individuals that stirs us most deeply – their expressions of distress and confusion, their unfinished gestures, the sense of damage. These are people who appear to live in the ruins of a drama. It is as if their whole bodies were given over to a scream. What all these people, these bodies and these images, have in common is the pure situation, that something is wrong – out of joint.

Everything in the book is in the form of a response. Ackerman carefully constructs a whole system of recalls and echoes, reinforcing a primordial desolation, set against the backdrop of an entirely fragmented and disordered world. It is an extraordinary and unsettling vision.

Born in Tel Aviv, Michael Ackerman moved to New York in 1984. After studying he began to photograph in the city’s streets, nightclubs and on its waterfronts. Between 1993 and 1997 he made several trips to Benares, India. The photographs from that project were published as End Time City by Robert Delpire, the legendary Paris based publisher. A member of Agence/Gallerie Vu, his work has been exhibited internationally and he has won several international awards including the Prix Nadar, the SCAM Roger Pic Prize and the International Centre of Photography Infinity Award. His work is in many major collections and in 2010 it was included in Traverse, the book and exhibition of the collection of Marin Karmitz which was shown at Rencontres d’Arles. Michael Ackerman now lives in Berlin.